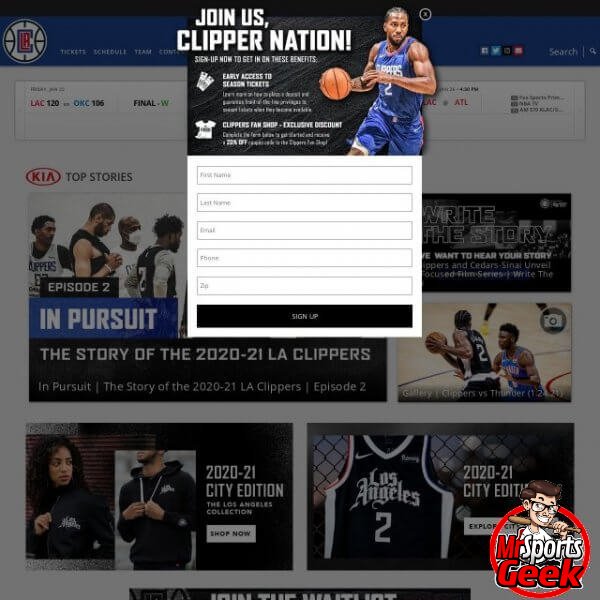 Founded in 1970, the Clippers originated out of Buffalo when they were known as the Buffalo Braves until relocating to San Diego in 1978 and eventually settling in Los Angeles in 1984. The move didn't change the teams fortunes, as they went through a dismal run of losing seasons.

After suffering through decades of losing, the Clippers fortunes suddenly started to change in the early 2000's as their collection of young and promising talent started to make progress. With a young core group of players of Elton Brand, Lamar Odom, Corey Maggette, Quentin Richardson, and Darius Miles the future looked bright for the team. Unfortunately things didn't work out, as injuries and a notorious team owner who refused to pay big money to his players broke up the young core.

With a dissapointing ending to their young future core being broken up, the Clippers again became a terrible team until they once again relied on draft picks a few years later and landed Blake Griffin and Deandre Jordan. With the Griffin and Jordan as the new building blocks of the future, the Clippers got an assist from the league which handed them Chris Paul and finally the franchise fortunes finally turned in their favor. With the trio playing well, the Clippers had finally gotten a taste of success with mulitple playoff apperances of te year, and were 1 win away from reaching the western finals.

In the end, the trio of Griffin, Jordan and Paul would eventually ran it's course as the team never could fully fulfill the champtionship expecatations. All 3 players are now playing for different teams and the Clippers are yet again looking for answers.

Indiana Pacers are based in Indianapolis, Indiana. From 1967 to 1976 the team competed in ABA and then joined the NBA. However, their most successful seasons were during that...
12. Los Angeles Lakers