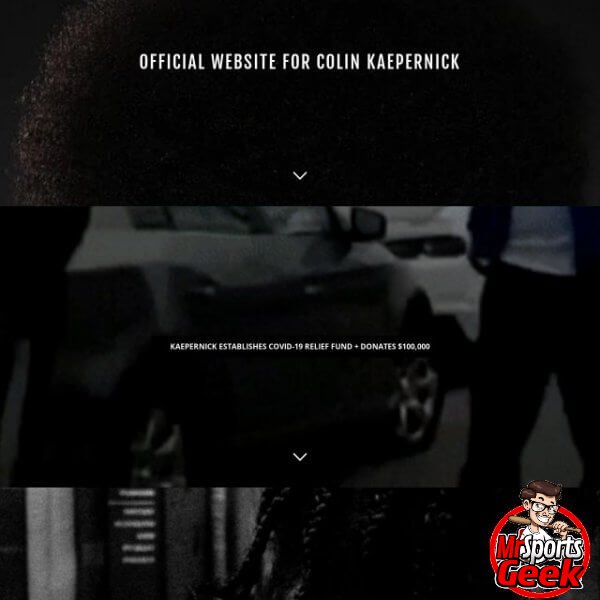 Colin Kaepernick is a former NFL player that played for the San Francisco 49ers from 2011 to 2016. However, he is most known for taking a knee during national anthems as a way to protest. According to Kaepernick, this was a protest against the racial injustices going on in America. After his time with the 49ers ended, no team wanted to sign him because of the fact that he was drawing too much attention and no team wanted to garner that attention in their locker rooms. He became a controversial figure since that time and there are two camps, people who fully support him in everything he does and people who think that he is doing this more for attention and trying to profit from this. People started criticizing him, even more, when he signed a deal with Nike in 2018 that could be worth millions.

Let’s leave politics out of this and focus on the website, which in my opinion looks very well made. I loved the design because when you scroll down the picture on the background changes and that effect looks kind of cool. A major issue that I found with this website was that it didn’t have any biography tab for the life of Kaepernick, where people could get more informatoin about him. It looks more like a website dedicated to selling merchandise. If that is the case then this website is perfect, but the name of the website itself is misleading because it says it’s the “official website for Colin Kaepernick” and it is only focused on showing the merchandise that he has to sell in order to fight racial injustice.

I would love to see more about his personal life, or the stats that he put up with the San Francisco 49ers. If we’re not focusing on the content but on how the website looks, I have to say that the black color in my opinion, is a representation for the African-American culture which is a nice touch. The website does make it a point that Kaepernick has a mission and a pledge to provide which is very uplifting and I respect any athlete that tries to give back to the community.

Generally, it looks quite nice I have to admit, the design, the colors, the simplicity have gotten my attention. On the other hand, the lack of content and also the lack of details about Colin Kaepernick makes me give this website 3 stars out of 5.

A polarizing figure, who had a brief but very mediocre NFL career, Tim Tebow is best known as the religious humanitarian, than the player who was drafted high in...
6. David Beckham