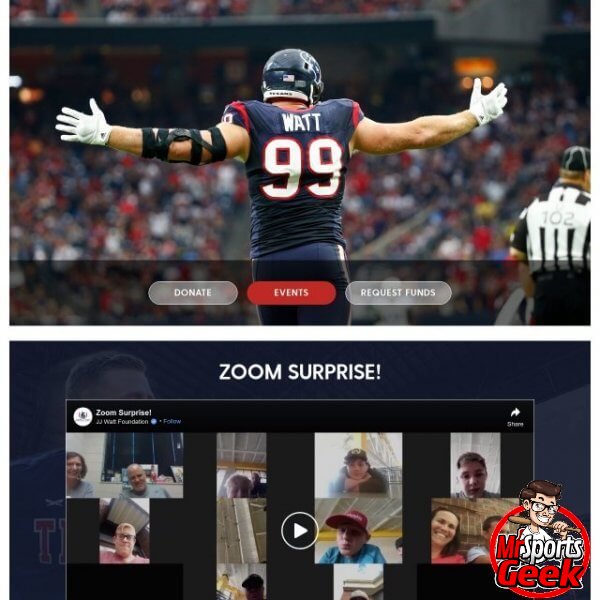 J.J. Watt is known for being a tremendous player for the Houston Texas. Drafted 11th in the 2011 NFL Draft, he has become one of the better defensive players in the NFL. He is a defensive monster, receiving the NFL Defensive Player of the Year Award 3 times in 5 seasons. Ever since he got drafted he has been a great athlete and Houston Texans are definitely lucky to have a player like him on the roster. He also made the Pro Bowl 5 times, while also being able to secure a spot on the All-Pro first team 4 times.

While his defensive skills are obvious, he is even a better human being. The effort that he regularly puts into making better the lives of the less fortunate is just mind-blowing. He has used his fame to help people not only a couple of times, but he does so in regular fashion. The JJWFoundation was founded back in 2010 and has helped many causes. He has helped schools from all over the country through this foundation. His biggest accomplishment, however, was in 2017, after the devastation that hurricane Harvey caused. J.J. Wat donated personally $100,000 for the people affected by this hurricane and hoped that he would be able to reach the goal of $200,000. But something fascinating happened, he was able to raise more than $37 million.

When you go to this website you can immediately see the Donate tab, Request Funding, Merchandise, Events, The Foundation, About JJ, News, and Contact. It’s very straight to the point and you can see that it doesn’t try to make Watt seem like a superhuman, but rather a group effort of people helping each other. The thing that I was impressed the most by this website was that it has the Request Funding tab. Through this, you can request funding for the After-School Programs. In this way, everyone can make requests for their schools, so it’s not just schools that the organization randomly picks, but people from all over the country have the chance to be funded by this.

In general, this website is exactly what it promises to be, nothing flashy, straight to the point. It is certainly a great website for people who both want to receive funds or people who want to give something back to the community. For it's efforts to better lives and focus more on humanity rather than sports itself, I would rate this website 5 stars out of 5.

As one of the greatest basketball players of all time, Kobe Bryant had a long, but very successful basketball career, while playing for the Los Angeles Lakers. His career...
4. Tim Tebow