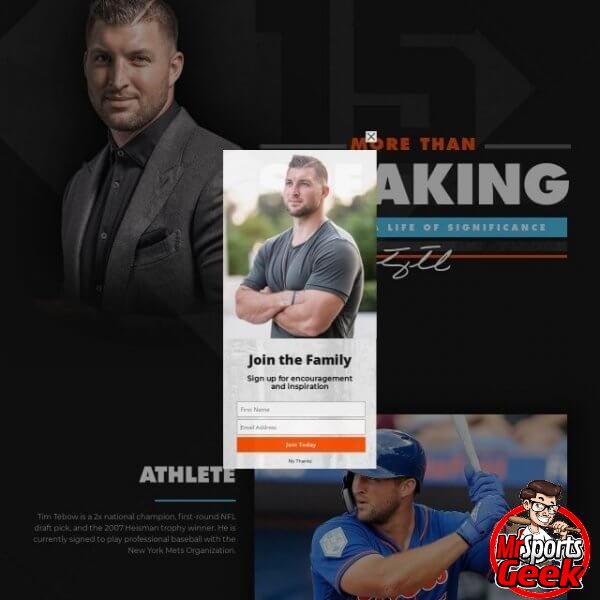 A polarizing figure, who had a brief but very mediocre NFL career, Tim Tebow is best known as the religious humanitarian, than the player who was drafted high in the first round after a stellar collegiate career. At one point in his career, he was very famous in the league. He was a pseudo celebrity entering the NFL and managed to win many awards during his college years, but unfortunately for him, that success didn’t translate to NFL. He played for the Denver Broncos and then got traded to the New York Jets, which soon cut ties with him. In 2013 he signed with the New England Patriots but was released on August 31. Philadelphia Eagles were the last team he played for in the NFL. They signed him in 2015 and he played 4 preseason games but was released.

With his professional football career coming to a halt, he said that he would try to play professional baseball and in 2017 and 2018 he played for the Mets in the minor league baseball. Currently finding success in the Mets minor league system, he has a chance to make to the big leagues.

The moment that I entered the website you are greeted by a gigantic picture of Tim Tebow looking like he is trying to save humanity and he also added a tacky inspirational quote. You can see that this website was made professionally by some well-paid people to make it look interesting and different, but I have to say it failed spectacularly. You can’t scroll the website, but rather you have to click on the menu button, that will lead you to About Tim, Speaking, Newsletter, This is the day etc. and every time that you click one of those tabs you are forced to see them shoving his new book down your throat.

It’s obvious that he is trying to sell his persona as a Christian that has made a comeback and wants to help people, but that help comes with a price. The website, in general, is well made and visually appealing, it isn’t clunky and if it wasn't for his pictures being thrown at you for every page, it's a decent website. For these reasons, I have to say that this website looks more like a cash grab rather than a website for a celebrity. Not impressed at all with the approach. Cool looking website, but the execution is off.

J.J. Watt is known for being a tremendous player for the Houston Texas. Drafted 11th in the 2011 NFL Draft, he has become one of the better defensive players in the NFL....
5. Colin Kaepernick